Happy thanksgiving everyone!  This is our last week (18th week) of csa pick ups.  Thank you everyone for taking part in the CSA this year.  There’s still 2 more weeks for the people who just don’t know when to quit and signed up for the extra 2 weeks.  These pick ups will just be on Tuesdays( oct 17 and oct 24) and we’ll have the market stand up as well on those days.  We also have some spots left in the winter CSA which starts Nov 6th.

Last week was Irina’s last week.  She’s now gone off to Germany for holidays for 2 weeks, but I’ll save some hard jobs for her when she gets back. We had a going away part for everyone before Irina left, but then in the end Irina couldn’t make it to her own party!  Shenggang and Nicholas came and it was nice to see everyone!

Jaroslav is also leaving soon: he goes back too Czech on the 23rd for a day and then off to a farm in Chile until January.   He has been here 6 months now! It doesn’t feel that long.  He started in April with planting and digging quack grass out of the fields and other than his week off working at another farm has been going solid since then.   We’re going to miss him.  He’s a pretty remarkable person: he’s more responsible, kind, helpful and mature than I am and I’m almost twice his age.  But now I have to take advantage of his helpful nature and think of all the jobs I don’t want to do and get him to do it before he leaves.  There’s going to be some serious overtime for Jaroslav the next two weeks! But it will help him to sleep on the plane…  Make sure to give Jaroslav a hug goodbye this week.

We’ve had  a few frosts over the last week and so the summer crops like tomatos, peppers, eggplant are pretty brown and crispy now.  We did a final pick through all the tomatos and peppers and haven’t yet weighed them but it looks like a lot.  If we end up giving CSA a bunch of peppers this week I’ve had some in my fridge for a months, so they should last a while.  And green tomatoes will ripen. 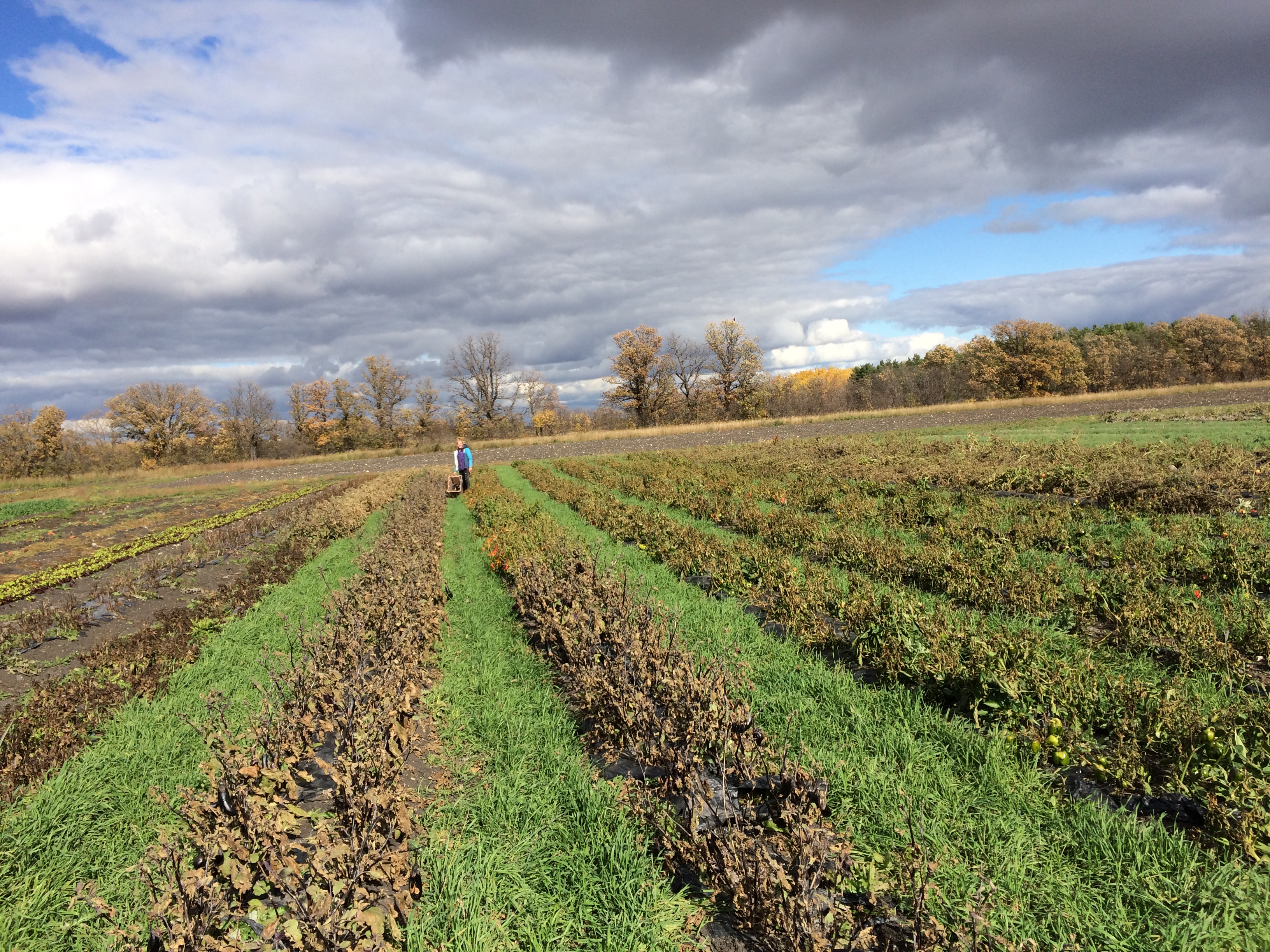 We also took down all the tomato trellis and are ready to till a lot of these plants back in now..

I finally work my jacket this week – this has been warm fall!  Overall I think it’s been the most comfortable year I’ve experienced.  No mosquitos, not a lot of rain, and not very cold: it can only get worse…I can see the downside to anything!